On Day 10 of my quarantine, I woke at 3 am to screams and crying from the village. I got up and got dressed and was very scared. I sat in my room wanting to go check on Esther (heavily pregnant and alone as thankfully her kids had gone home with their dad earlier) in the main staff house but did not feel it was safe enough. By 4:15 the drums seemed to have stopped and things went quiet. As I was so tired I got back into bed (fully dressed) and fell back to sleep.

Just before 5am, Sai one of the Kumbali workers staying in the Basecamp lodgings, came to my house knocking frantically saying I needed to get out and run and that we were in danger. He told me to lock the house and follow him. I asked about getting Mara but he said it was my life of hers and the matter was urgent and the Kindergarten School down the road was burnt to the ground and they were coming for us next.

We ran to get Esther, she was very confused at this point, and we ran from our houses through the bush as over 200 people armed with panga knives, sticks, rocks and clubs came. We got to the main Kumbali Lodge by 5:30 and people there were ringing everyone they could from police to military and Embassy contacts. The police were not responding and just kept saying “we are coming”. At this point we were still unsure of our safety and worried the Lodge would get surrounded.

At 6am someone received a picture of Kusamala on fire. Kusamala is a permaculture NGO and our neighbours at the Kumbali Basecamp. So the reality of our camp going up in flames really set in. Sai, the Kumbali worker who woke us up, went back to my house and retrieved my passport, laptop and camera bag. I told him not to risk his life going back but he said he had to go and check on people at Basecamp anyways. We had heard some of the Kumbali guards were injured, so he said if he could he would get my stuff if it was safe enough.

Sai made it in and out safely and not long after the three thatched huts that were my house were burnt to the ground by the mob. They must of broke in and looted first, which is how we think Mara escaped. But at this point I did not know this and was crying as I felt so bad having left her dead. I was begging people for me to be able to go back and find her but was told it was not safe enough.

Some time after 8am the police said it was finally safe enough and I went with them back to the Basecamp to try and find Mara. Someone had said they had seen a golden dog running around frantically, so I knew it was her. After 20 mins of yelling her name she came back. The poor thing must have been so scared. I was so happy she was still alive! 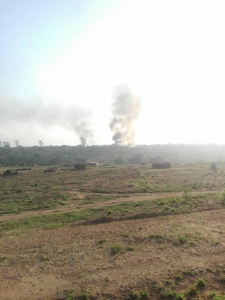 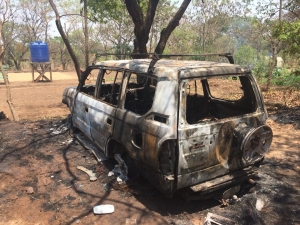 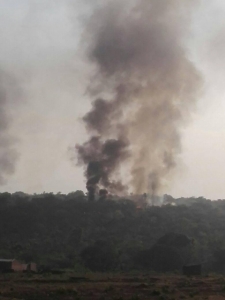